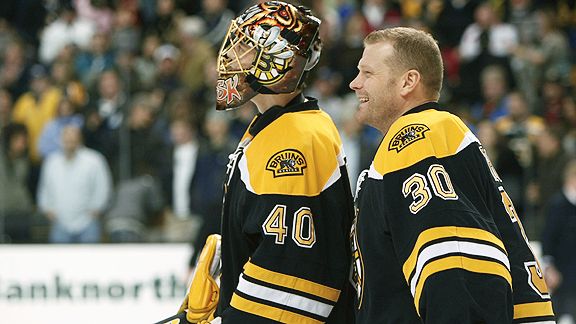 The tandem of Tim Thomas and Tuukka Rask between the pipes for the Bruins made it interesting down the final stretch of the regular season.

The Bruins nearly repeated last year’s performance and came oh-so-close to taking home the William M. Jennings Trophy for the second consecutive season. : “For the team with the fewest goals-against.” The last time a player/team won the trophy in back-to-back seasons was when this year’s winner, Martin Brodeur (77 GP, 45-25-6, 9 SO, .916 SV% 2.24 GAA) of the New Jersey Devils did it from 1995-97. Brodeur and the Devils’ 2.27 goals-against edged-out Rask, Thomas, and the Bruins’ 2.33.

Although they won’t be taking home any hardware at this year’s NHL Awards, the Black-and-Gold’s goaltending has remained one of the NHL’s best for the second season in a row, and ever-improving since Claude Julien has taken the reigns behind Boston’s bench. Since inheriting a Bruins team under the Dave Lewis regime — 29th ranked 3.48 goals-against and 25th ranked in goals-for in the 2006-07 NHL season– Boston’s defense and net-minders have drastically improved.

Coming off a Vezina Trophy season, Thomas has struggled a bit and failed to reach the expectations of many. Having been pulled in six games this season. No. 30 had been shaky — indicative of the entire team — when trying to string together good consecutive performances.

However, despite the mediocre season, Thomas has kept his numbers consistently low under the Julien regime. The 35-year-old  has posted a 81-48-21 record over the past three seasons with 13 SO, a .924 save-percentage  (over 150 games played and 4,292 saves on 4,646 shots) and a goals-against average that hovers right around 2.30. It’s easy to point the finger at Thomas for a sub-par season and the six games that he was pulled from net. But it takes two (or more) between the pipes to make a team top the NHL in their respective categories.

First in the NHL in goals-against average (1.97) and save-percentage (.931), 23-year-old Tuukka Rask is coming off a “are you kidding me” type of season. Rask finished his rookie campaign with a 22-12-5 record in 45 games played, 5 SO, and a sense of ‘everything’s going to be okay’ in Boston’s crease for years to come.

This year was often called a “hiccup” of a season. Not playing to the level of their near Presidents’ Trophy-like season of 2008-09, the B’s finished dead-last in the NHL in goals-f0r (2.39) and made their playoffs hopes look grim a number of times throughout the season.